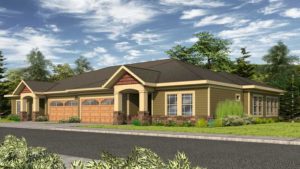 retirement community has started taking reservations for its planned “Westside Villas,” which will be Craftsman style homes with beautiful open ﬂoor plans that are great for entertaining family, friends and neighbors. Among the standout amenities are covered patios that allow for year-round outdoor living. Other amenities and features include gas ﬁreplaces, over-sized garages, quality ﬁnishes, spacious rooms, and separate utility rooms.

Those interested in living in one of the villas can now put down a fully refundable $1,000 priority deposit, which will provide access to all the important expansion details as they are developed. With this deposit, a priority number is assigned putting depositors in line to select a new Westside Villa.

“The villas are part of a ﬁve-phase expansion plan that was prompted by increased demand as the retirement community has been running a wait list for the past 2.5 years,” explains David Lewis, Executive Director. “Phase one of the project will be increasing parking space; phase two will be adding a new memory care center; phase three will be the addition of the new independent living villas; phase four will be amenity upgrades and additional dining options; and phase ﬁve will be improvements to the existing villas. In all, the campus will expand from 35 acres to 43 acres,” Lewis says.

“We’re here to meet the needs of the community, and right now, demand is greater than what we’re able to offer,” Lewis says.

Capital Manor is the only not-for-proﬁt Continuing Care Retirement Community within 30 miles of Salem, and the community has more than ﬁve decades of experience in senior living.

Capital Manor resident, Jim White and his wife, moved into the retirement community 12 years ago. At the time, White was 71 years old and had retired from a career working for Boeing. Prior to moving in, he and his wife spent eight years traveling in their RV. “When we walked into Capital Manor, it was home,” White says. “We’re all like family here.”

White says he’s impressed with the friendliness of staff members as well as fellow residents.

Since moving in, White has been involved in several resident advisory councils and has played an integral role in planning Capital Manor’s expansion as he’s served on the Master Plan Expansion Committee.

Moving in at age 71 allowed him to ﬁnd a sense of purpose in this next chapter, as well as enjoy all of the amenities at Capital Manor and become truly involved in the community that he calls home.

“You can’t come in too soon,” he says.  And, moving into Capital Manor, states White, is the “best inheritance you can give your children because they don’t have to worry about you.”

Capital Manor offers maintenance-free living and a continuum of care. The community is governed by a local volunteer board of directors who make decisions based on resident desires. Residents have an advisory council that meets regularly with the board to communicate resident goals and priorities.

Capital Manor’s care is exclusive to its residents, and it’s a requirement that one lives at the retirement community in order to have access to the high-quality care offered.

The new memory care community will feature a state-of-the-art design with private suites and a spacious outdoor courtyard, as well as apply best practices for this specialized type of care.

Capital Manor residents also have access to a wide array of services and amenities, including housekeeping, meals, home maintenance, scheduled transportation, an indoor swimming pool, community gardens, a bistro, a woodshop, a ceramics studio, general store, thrift shop, bank, beauty salon, wine and coffee bar and campus-wide Wi-Fi. Plus, residents can enjoy their hobbies or discover new ones. Among the activities: Taking a spin on the pottery wheel in the ceramic studio; enjoying concerts and guest speakers; singing in the resident choir; tapping into creativity with writing, painting, drawing, lapidary and more; or taking classes at a local college; keeping ﬁt at daily exercise classes and having fun at movie or game nights.

For those interested in making a reservation or getting a tour of Capital Manor, you can make an appointment with the retirement community’s marketing team by calling (503)-967-8072.  Visit our expansion page to learn more.